After a couple of weeks in Beta, the new TED Books app launched today on iPad and iPhone and I'm incredibly excited about it. Here's why.
1. It brings together all of our authors in one irresistible package. 16 current titles with new ones to be released every two weeks. 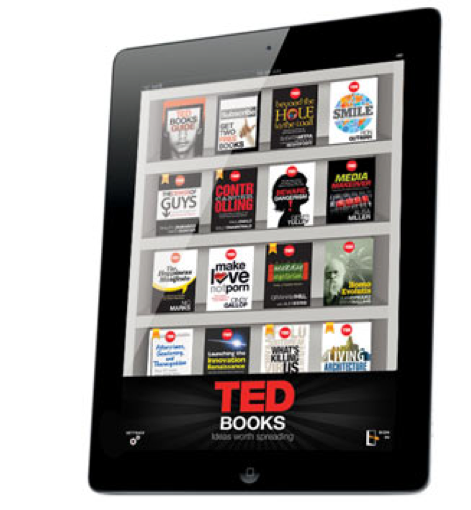 2. It's free. I think a lot of people are going to download it. The titles cost $2.99 each BUT see 9 below for a tasty surprise....
3. The app offers all the goodies you'd expect in the age of the tablet: glorious images, video, audio, links to maps, online resources, search, commenting, sharing, automatically updated editions, and much more.
4. But, crucially, the app retains the linear narrative thread that makes reading so appealing. Some ambitious attempts to create ebooks on a tablet have somehow abandoned this. When you snuggle up with a book, you want the author to take you on a journey. You don't want to have to make constant choices as to what to look at. If you think of a book as a wonderful train journey, some ebook apps effectively boot you off the train and make you travel by rental car. They make you explore more than you want to. I see the the TEDBooks app as retaining the feel of a train journey but with the added bonus that you can look up from time to time and enjoy spectacular new views. In other words, you start at the beginning, and continue through to the end. But from time to time, when an image or a video or an external link could add to the meaning of what you're reading, they are there for you to enjoy.
This is why we commissioned our partners at The Atavist to build this app for us. Of all the e-book developers, it seemed to us they had best understood how to combine new media wizardry with the traditional lure of reading. Try it out. This are lots of enhancements to come.  But what's already here is pretty amazing.
5. Each book can be read in a single session. Just an hour or so. I see this as a terrific fit for our over-busy lives. One reason reading has been in decline is that it's just too daunting to start a traditional 80,000-word book knowing it will take hours and hours to complete. You could argue that traditional books are the length they are in part because people once had fewer competing claims on their leisure time, and in part because the physical nature of a printed product means that books have to be a couple hundred pages long to feel like value for money.
But today the question to ask of a non-fiction book is: what is the right length to explain this idea?  There are many 80,000 word nonfiction books that communicate most of their value in a couple of chapters, the rest padded out because -- well, gee --  books just have to be a certain length. We're excited to offer books that are mostly in the 15,000  - 20,000 word range. And just as an 18-minute talk can often (because of the discipline of compression) be better than a 60-minute talk, so these short books encourage authors to offer focused gems of explanation.
6. Our authors rock! Most of them have given TED Talks (and these are included by the way, in each book as a video epilogue), but the books dig into their subject matter far more deeply than their TED Talk ever could. A TED Talk is typically 2,000 words. These are 10x more. From the future of humanity to the secrets of happiness, these books offer transformational thinking.
7. We're offering authors a new publishing model.Traditionally the time from completion of manuscript to appearance on the street is as much as a year. In this format we can shrink that to a month or less. And instead of offering authors 10-12% of cover price, we split proceeds with them 50/50. (And by the way, all of our share of the revenue is being reinvested to grow this platform).
8. It's the logical next step for TED. Our mission is "ideas worth spreading". The talks have proved a hit, having been viewed more than 800 million times. But people inspired or intrigued by those talks tell us they want to dig deeper. The best way to do that is in a book.
And last, but most definitely not least....
9. We're unveiling today a new way to collect books: by subscription. We're releasing a new book every 2 weeks, and we'd like people to own every single one of them. Why? The same reason why many people want to watch a wide range of TED Talks. There's terrific benefit to signing up for breadth of knowledge as well as depth. This is the path to:
- multi-disciplinary stimulation
- unexpected inspiration and insight
- a richer understanding of the world
- an expanded sense of possibility
- a reading experience shared with many others. "Have you read this week's TED book?!."
People have come to trust TED's curation of talks, accepting that we'll only post what we consider to be really interesting and significant. We're asking for the same level of trust when it comes to book selections. And in a time-constrained world that's going to be very appealing to some people. Given a landscape of millions of competing titles out there, it overcomes the difficulty of discovery.
Strategically, building a strong subscriber base is key to the future of TED Books.  That's why we've made the launch subscription offer irresistible.  $15 not only buys a three month subscription, and therefore the next six titles we publish. It also buys the right to download and own every single existing title, all 15 of them. I hope you'll download the app, become one of our founder subscribers and help us invent the future of reading.
P.S. Yes, an Android version (inc Kindle Fire) to follow. Yes, TED Books also available as Kindle Singles and on Nook, iBook and more. Details here.