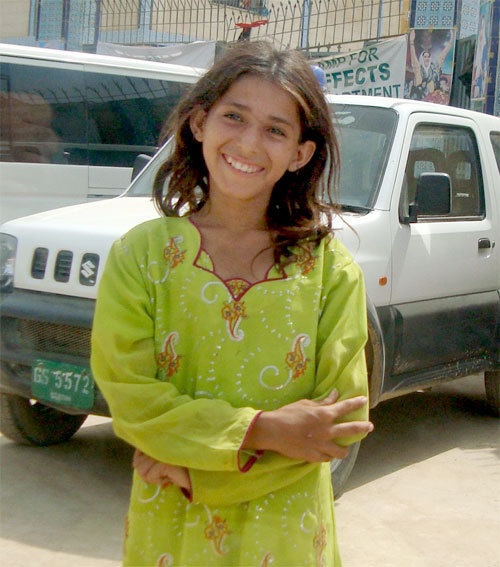 This is Urooj. She is nine years old. She was born in the villages of Jacobabad. Her father is a farmer. She has seven brothers and three sisters. She loves playing with babies and is so happy that her mother has given her a baby brother just last week. “I wanted a sister, but brother is okay too.”

She has the biggest grin on her face as she watches us distribute the food. When an old woman comes knocking on our car window, Urooj is dancing in the background making twirling gestures with her fingers. “She’s crazy”, she mouths to me. “This old woman is crazy, ignore her, ignore her!” She lets out a peal of laughter when the old woman turns and swats at her.

She is a natural leader. Other children crowd around her. They follow her where she goes and sits when she sits. Even the older boys shush when she says shush. “They are excited because of the food,” she explains.

She loves cold cucumbers. When I tell her I will come visit her again, she says with a passion, with such an air of authority, its almost a command: “You must bring me cucumbers.” I really must. She has convinced me of the necessity of cold cucumbers in life.

She is disdainful of the management of her camp. “They say food will come, but it doesn’t. We got food only once yesterday. It wasn’t enough for everybody. What’s the point in lying to us?” I don’t try and explain the magnitude of the crisis to her but I admire her practical tone.

She announces her name to anyone who will listen. I ask her if she knows what it means. She hesitates and I fill in the silence “Rising, ascension, greatness, higher, up in the skies.” I keep adding synonyms and her smile grows wider and wider. She understands it is a powerful name. When I tell her she is beautiful, she laughs. There is an acquiescent acknowledgement in that laughter. She has heard this before I am sure of it. I am scared she has heard this before. Right before I was leaving for the camp, I saw a news report about girls being abducted from the camps. But right now, this little piece of magic tugs at her lime green tunic and tosses her golden brown hair. I am breathless. When I ask if I can take her picture, she crosses her arms in front of her, raises her chin proudly and smiles. I take a close up and then turn the digital camera around so she can see it. She frowns. “Take another one.” She steps back a few paces, out of the shadow of the car and into the sunlight. “Now take it.” She is pleased with the second result. I tell her I must leave now. “Will you come again?” she asks, her smile faltering for the first time. I make promises that I only pray I can keep. She shoos the children back from the car. They have been standing with their noses pressed against the windows. The children run on to the next amusement, but she stays. She stands and she waves and waves and waves as we drive away. She has the biggest grin on her face. There is something choking my heart. I feel like throwing my head up to the sky and howling. This is a smart, beautiful, interesting, sassy, funny little person. There must be thousands more like her. Will they spend the days of their lives living under two metres of cloth, waiting for food that never comes? In the right place, at the right time, with the right help, this girl could do wonders. Why her? Why me? What is fair, what is not? Is asking that question kufr? What can I do for this girl? Will it make a difference? What is the point of anything? I am angry and I cannot explain why. I will be grateful for the opportunities and privileges of my life later. For now…I dream of Urooj. Khuda tujhe Urooj aisa naseeb kare
kay rashk tere naseeb per falak kare
har more per farishtay hon saath tere
har gham par hifazat tairi Khuda kare… -- This was written by a young woman Hiba, who visited a relief camp.