I was born in Pakistan, so this makes me incredibly happy: a self-organzied gathering of more than 200 people, mostly young women, in Lahore to dream about what Pakistan's future might be.  Below is a report from organizer Areej Mehdi, to whom, my congratulations.  More pictures on their blog here.   More about TEDx events here.  5-10 are held somewhere in the world every single week now! 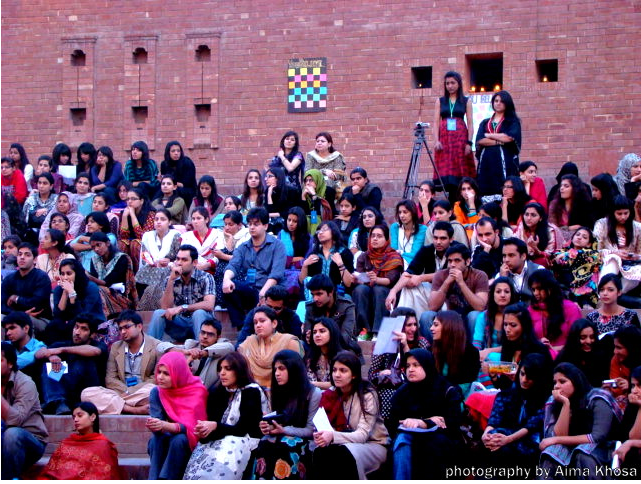 Where do I start?!
The TED name attracted a lot of people from the professional world. We had people applying from outside Pakistan, even though they knew it was a TEDx event but everyone was very excited. However, we had to limit our attendance to 200 - 300 people due to security concerns. Kinnaird is an all-girls institute and as such we do not have mixed events. I had to convince the administration to allow us a mixed TEDx event because I'm aware how rare TEDx events are in Pakistan, let alone Lahore.
We themed the event "Believe in Tomorrow". I think it was very pertinent to address the feelings of despair residing within students when it comes to the future of Pakistan. Through this event, we hoped to address those feelings and come up with a positive spin on things.
The program was divided into two sessions with a 30 minute break in between. For our first event, I approached diverse speakers. We had students, teachers, political and social commentators, along with HR managers.
I think the best part about the event was its location. We had no carpets, no cushions and yet people enjoyed the event. We did have weather concerns, but the event managed to go smoothly enough. The audience comprised of students mostly, but we had people for the professional world as well. We managed to introduce TED to a whole lot of people because only a few of them were already familiar with the TED name. The event was highly appreciated by all. The one negative feedback that I did receive was that we had not publicized the event on a greater scale. But I had to do that since we could not allow a great number of people given the budget that we had been granted.
Our speaker list included names famous and unknown. We had people like Fasi Zaka, a political satirist and commentator; Omair Rana, professor of Media Studies and a theater artist; Huma Mirza, an educationalist working to promote the concept of Reading Rooms in Pakistan; Asim Fayaz, TEDxLahore Curator who is involved with various social action projects and is quite popular with the student body here, among others.
I personally loved the feeling of becoming closer to TED through the hosting of this event. Asim and I constantly joke about the TED bond that we have developed over the months. He was very helpful in explaining things to me at times when I was stuck, so I'd like to mention his name especially.Regards,
Areej