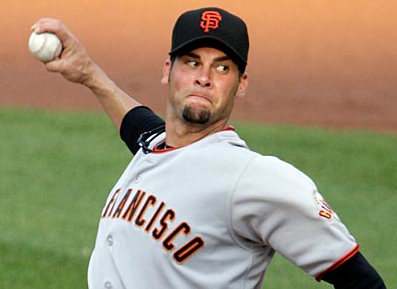 I've had a thing for the San Francisco Giants ever since I moved to the Bay Area (from England) in the mid 90s.  So I was as happy as anyone last night to see their improbable comeback continue, led by the stellar pitching of Ryan Vogelsong.

How did he do it? Focus? Years of hard practice? Buster Posey's calls for a rare blizzard of fast-balls?  The intensity of the crowd?  All of the above plus a little luck? Vogelsong had a different explanation:“I just believe that God had a plan for me this whole time,” Vogelsong said.  “I feel like all the stuff that I went through—going to Japan and going to winter ball at 33 years old, and getting back here last year, is stuff that He was doing for me to get me prepared for this moment.”
I grew up with that way of looking at the world.  Everything that happens to you is part of God's plan. As promoted in many evangelical circles, this idea is supposed to apply down to the very last detail, including which aisle you end up in at the supermarket.  It can be comforting in rough times, thrilling in great times. Only problem is it makes no sense.
You can just about picture a god able and willing to execute a multi-year plan involving Japan and winter ball all in order for Vogelsong to win last night. But that same plan must then include a truly miserable evening for 400,000 people in St Louis.  Just seems a tad unlikely.
Reminded me of the young woman I saw on US TV at the end of 2004 flown home safely from Sri Lanka,  gushing that God had saved her from the terrible tsunami.  (While for some reason deciding to leave a quarter of a million others to drown.)
There is no possible way to have a world view in which God plans in detail the interconnected, and often tragic, lives of 7 billion people (not to mention a world that includes such delights as the Guinea Worm) and still be someone who you'd want to, you know, worship.  Tom Honey gave a TED talk about this.  Make of it what you will. But meanwhile, please, good Christian sports heroes: try a different narrative. It's not surrendering your ego to "offer the glory to God".  Saying that is actually deeply ego-centric. It's claiming that God's plan for you matters more than his plan for all those people whose day you just spoiled.
P.S. In the unlikely event you ever read this, Ryan V... thanks for a great night!