The TED website has seen its traffic more than double since we started putting up talks from TED2009. Here are seven of the very best of those (in the order in which they were given at the conference).

1. Juan Enriquez looks beyond the economic crisis to the next stage in our species' evolution. Stand by for mindboggling science ...and a lot of laughs too. http://tr.im/iU5O  2. Pattie Maes gave a short, stunning demo of a technology developed in her lab at MIT which combined a personal projector with cellphone, computing and web technologies to create what she called a 'sixth sense'. More than 3m people have now viewed her talk. http://tr.im/iU6w

3. Elizabeth Gilbert, author of Eat, Pray, Love, won a standing ovation for her appeal for a beautiful, unexpected technique for nurturing creativity http://tr.im/iU65  4. International phenom Gustavo Dudamel conducted an orchestra of kids from Venezuela, many of whom had been recruited from poverty-stricken villages and slums through the (TED Prize-winning) El Sistema program, and raised to a level of talent and passion that beggars belief. http://tr.im/iU51  5. Bonnie Bassler explained the startling discovery that bacteria communicate with each other in sophisticated ways to coordinate attack strategies.... and what we can do about it. Remarkable science made understandable and thrilling. http://tr.im/iU3Y  6. Willie Smits told the story of an astonishing decade-long labor of love in which he re-grew from scratch a rainforest that had been destroyed, offering hope for one of the world's most alarming problems. http://tr.im/iU4F  7. Barry Schwartz brought the audience to its feet with his plea for a rediscovery of "practical wisdom" in business and public affairs http://tr.im/iU5t  If these excite you, you can see the full set by selecting TED2009 from the "Show by event" option on the left of this page. (Truth be told, they're all pretty hot.) 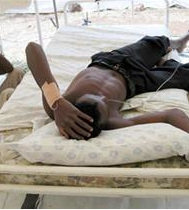 The killers travelled through the water silently, undetected. Carrying miniaturized chemical weapons, they picked their moment carefully before inflicting agonizing pain  on their unsuspecting victims.  The children, more than 5000 of them, never knew how their assailants came upon them, nor that a simple countermeasure,  costing under $1 could have saved their lives.  Instead they passed away, in pain, exhaustion, and filth.  They died yesterday. Just like the 5,000 who died  the day before that, and the 500,000 already lost this year.   All victims of the global scandal of readily-preventable diarrheal deaths. More.

This horrifying story is the front page lead of all of the following major news outlets:
< none found>

A shocking story, courageous response... Love that he references Dan Gilbert. This is classic instance of "synthesizing happiness."

(This essay was
published by Edge.org in answer to the Question:
"What game-changing scientific ideas and developments do you expect to live to see?")
When we think of the world's teeming billions of humans, we tend to think: overpopulation, poverty, disease, instability, environmental destruction. They are the cause of most of the planet's problems.
What if that were to change? What if the average human were able to contribute more than consume? To add more than subtract? Think of the world as if each person drives a balance sheet. On the negative side are the resources they consume without replacing, on the positive side are the contributions they make to the planet in the form of the resources they produce, the lasting artifacts-of-value they build, and the ideas and technologies that might create a better future for their family, their community and for the planet as a whole. Our whole future hangs on whether the sum of those balance sheets can turn positive.
What might make that possible? One key reason for hope is that so far we have barely scraped the surface of human potential. Throughout history, the vast majority of humans have not been the people they could have been.
Take this simple thought experiment. Pick your favorite scientist, mathematician or cultural hero. Now imagine that instead of being born when and where they were, they had instead been born with the same in-built-but-unlocked abilities in a typical poverty-stricken village in, say, the France of 1200 or the Ethiopia of 1980. Would they have made the contribution they made? Of course not. They would never have received the education and encouragement it took to achieve what they did. Instead they would have simply lived out a life of poverty, with perhaps an occasional yearning that there must be a better way.
Conversely, an unknown but vast number of those grinding out a living today have the potential to be world-changers... if only we could find a way of unlocking that potential.
Two ingredients might be enough to do that. Knowledge and inspiration. If you learn of ideas that could transform your life, and you feel the inspiration necessary to act on that knowledge, there's a real chance your life will indeed be transformed.
There are many scary things about today's world. But one that is truly thrilling is that the means of spreading both knowledge and inspiration have never been greater. Five years ago, an amazing teacher or professor with the ability to truly catalyze the lives of his or her students could realistically hope to impact maybe 100 people each year. Today that same teacher can have their words spread on video to millions of eager students. There are already numerous examples of powerful talks that have spread virally to massive Internet audiences.
Driving this unexpected phenomenon is the fact that the physical cost of distributing a recorded talk or lecture anywhere in the world via the internet has fallen effectively to zero. This has happened with breathtaking speed and its implications are not yet widely understood. But it is surely capable of transforming global education.

For one thing, the realization that today's best teachers can become global celebrities is going to boost the caliber of those who teach. For the first time in many years it's possible to imagine ambitious, brilliant 18-year-olds putting 'teacher' at the top of their career choice list. Indeed the very definition of "great teacher" will expand, as numerous others outside the profession with the ability to communicate important ideas find a new incentive to make that talent available to the world. Additionally every existing teacher can greatly amplify their own abilities by inviting into their classroom, on video, the world's greatest scientists, visionaries and tutors. (Can a teacher inspire over video? Absolutely. We hear jaw-dropping stories of this every day.)

Now think about this from the pupils' perspective. In the past, everyone's success has depended on whether they were lucky enough to have a great mentor or teacher in their neighborhood. The vast majority have not been fortunate. But a young girl born in Africa today will probably have access in 10 years' time to a cell phone with a high-resolution screen, a web connection, and more power than the computer you own today. We can imagine her obtaining face-to-face insight and encouragement from her choice of the world's great teachers. She will get a chance to be what she can be. And she might just end up being the person who saves the planet for our grandchildren.

Here's a partial list of projects the TED Prize has helped create.  This makes me happy.

- www.one.org
- www.meetthegreens.org
- www.openarchitecturenetwork.org
- www.pangeaday.org
- www.instedd.org
- www.xdrtb.org
- www.eol.org
- www.onceuponaschool.org
- www.nexteinstein.org
- www.charterforcompassion.org
TED Prize explained here: http://www.tedprize.org/about-tedprize/
Much more in the works.
Funny comment exchange at Digg about Pattie Maes 6th Sense demo (which allows includes ability to recognize objects and give feedback on each one).
cavie2002   I just want something that will scan all women and tell me which ones will sleep with me
miggyb [[No matches found]] Try again? Y/N
http://digg.com/design/Sixth_Sense_Projection_Technology_TED
Nice seeing this hit Digg's front page despite boring headline.